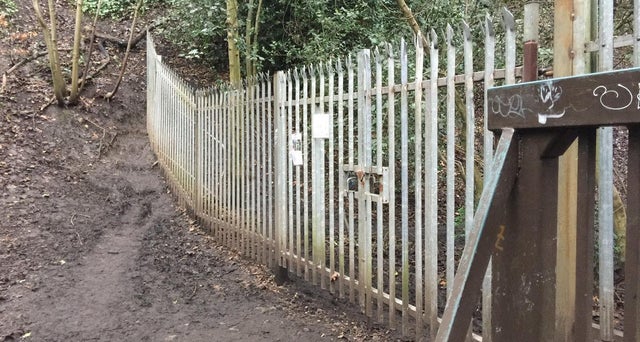 May 2020 Update
The blog below is from January, I have now had this update from teh Council:

Unfortunately our funding application to the FCC Communities Foundation has been unsuccessful.  Obviously there is little we can progress at present however, later in the year (after the Covid-19 crisis) we will be investigating options and seeking funds elsewhere.  If anything, it is more likely that we will be able to obtain funding for the Pipeline Bridge in the first instance.  Due to the limited access and costs we may have to think differently for the bridge over the river at Redhall Weir.  Options which have been discussed include:

Please note no decisions have been made nor will they be made without further investigation and discussion later in the year.

January 2020 Blog
On the 31st of December 2019 the Evening News carried an article about the long-term closure of the Water of Leith path between Sunbury Bridge and the steps at Dean Path. In the article Ian Johnston made the point that:

“…the Water of Leith is a particularly wonderful part of Edinburgh – something I appreciated more on my return to the city – and it would be a terrible shame if the path continues to remain in its current truncated state for much longer.”

I have spoken to Council’s Natural Heritage Officer about this and was given this response:

So it looks like there is no immediate solution to the problem.

I also raised the complaints I have received about two closed bridges in Colinton Dell. Both are outside my Ward but lots of my constituents use them – below is the response I received from the Council:

“With regard to the two bridge closures in the Dells, referred to in points one and two of your email, we do not have a timescale for the reopening of these. However, I can confirm a grant application has been submitted to FCC Communities Foundation, included in the application is improvements to the path/steps/drainage on the access path to/from Dell Road (by Colinton Kirk), the installation of a new Pipeline Bridge, the removal and installation of a new bridge over the river parallel to Redhall Weir. The application should be considered by the Board of Directors on 04 March 2020 who will decide whether the project should be funded. A capital bid has also been applied for internally and we should receive an answer regarding any potential funding by the end of February 2020.”

So it looks like there is no immediate solution to these issues either.