Context
Edinburgh is a growing city. By 2050 it will have grown by 25% and it is important that this growth is undertaken in a way that maintains, or ideally improves, the quality of life we currently enjoy. Indeed, Edinburgh must be a liveable city. That means governance, healthcare provision, culture and environment, education and infrastructure must all contribute to a good quality of life.

I’m tempted to say that the growth must also be “sustainable”, but it is hard (for me) to see how that rate of growth can be. Nonetheless, we must take steps in that direction if the city we love is to continue to be one of the best in the world. We must be mindful that the strategic decisions we take today, will inform how our capital evolves.

Additionally, we’ve seen how the Scottish Government thinks the motor car is a key part of this vision. The investment in the M8, M9 and M90 corridors are focused on creating a regional economic powerhouse based around the car. An expansion of air travel is also on their agenda. Nonetheless, we’ve also seen rail improvements – not least EGIP and link to the Borders. M8 M73 M74 Motorway Improvements – We have to be careful the congestion is not moved off motorways and into our Capital.

Within that context, we must think about how people get to Edinburgh and also how people move within the city. Indeed, we already know that half of the people living in Edinburgh are held up by congestion every day and that congestion costs Lothian Buses alone £2m per year.

To address these challenges we need to add capacity to the key arterial corridors (e.g. A702) and the city centre road network without adding to congestion. To do that, there is a recognition that we need to make public and active transport much more attractive. Our great bus service must get better. Active transport must be attractive, safe and enjoyable. This is not just about moving people from A to B, it’s about taking a holistic view and ensuring Edinburgh is a liveable City.

In the short-term, we can expect to see the implementation of a plan “to improve the public realm in the city centre with the aim of improving conditions for, and prioritising access for pedestrians, and public transport users” (SPOKES are excited about this.). Although this is focused on central Edinburgh, it has potential to set the whole city on a positive trajectory.

Running in parallel to this we have the proposed tramline “extension” to Newhaven. Like it or lump it, it has potential to add significant capacity to the public transport system in northern Edinburgh, and connect people there with growth areas in western Edinburgh.

There will of course be uncertainty, compromises and setbacks. Personally, I am concerned that the St James Quarter will come with 1,000 extra parking spaces (triple the existing provision). Linked to this, we have the proposals for “Picardy Place” – the space at the junction of Leith Street, York Place & Leith Walk.

Picardy Place
Picardy Place is important as it is the gateway to Edinburgh’s World Heritage Site. The space must showcase Edinburgh whilst also allowing the safe movement of people to and from the city centre. It has been an eyesore for many years, but now we have a chance to completely redesign it to meet Edinburgh’s future needs. 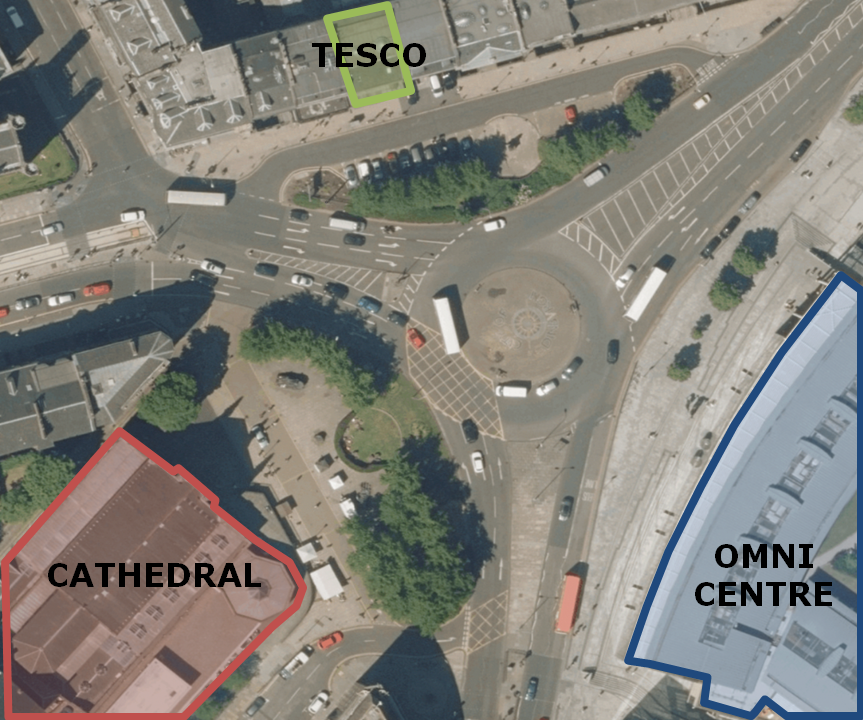 The current Picardy Place layout is awful and must be improved.

The problem we face is that the basic design at the heart of what is being proposed is now more than 10 years old and, on first inspection, looks like the kind of layout one would expect in a sprawling American city where car is king. Yes, pedestrian and cycle safety measures have been retrofitted to improve it. For many, however, this is like putting lipstick on a pig – it is still a pig.

The design is based on a gyratory layout – it involves three lanes of traffic revolving around a large triangular “roundabout” big enough to have a building on. Indeed, the central space was originally big enough for a luxury hotel. Since then, however, the space has reduced significantly in size to, amongst other things, allow the inclusion of safer footpaths, cycle lanes and to protect some public space outside St Mary’s Catholic Cathedral.

Early Picardy Place Gyratory Concept (with a luxury hotel in the central space).

Despite these improvements, however, there is a feeling that the design of the junction is too focussed on the movement of cars rather than people (there is a difference). Indeed, Lesley Hinds (Edinburgh’s transport chief until May 2017) said she “told officers months ago this proposal was unacceptable“:

Why are the Sustrans proposals not up for consultation? Told officers months ago this proposal unacceptable. An opportunity for the future to have an area with priority for public transport, Walk

Lesley Hinds is not the only person to raise concerns about what is being proposed for Picardy Place. In September SUSTRANS Scotland, a charity which promotes safe walking and cycling routes, walked out on discussions with City of Edinburgh Council regarding the design saying: “The concept of Hierarchy of Street Users is not at the centre of project thinking and does not follow Scottish Government policy for Designing Streets.” On the Gyratory specifically, they said: “The multi-lane gyratory traffic system appears unsuitable for an area at the gateway to Edinburgh’s World Heritage area.”

The Broughton Spurtle, a community newspaper that likes to stir things up (AKA Spurtling), reported strong opposition from both the Leith Central Walk and New Town and Broughton Community Councils. Indeed, the Broughton Spurtle also promoted an alternative design produced by Zone Architects.

The counter-proposal for Picardy Place from Zone Architects comprised a T-junction with concert hall.

This, and adverse comments from the public, triggered improvements to the design and a further round of public consultations, but the gyratory layout was retained. Of these designs, SUSTRANS said: “we remain unsupportive of the gyratory concept because we feel it does not adequately balance the pressure of traffic, with the opportunity to create a successful, quality public space and transport interchange.” 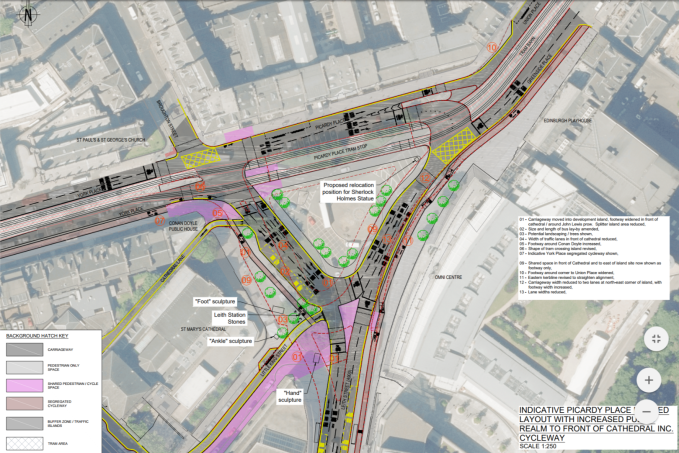 The current Picardy Place design out for consultation.

SPOKES, a campaign group which promotes cycling, described aspects of the revised proposals as “completely inappropriate” and concluded the plan added “very significantly to potential pedestrian/cyclist conflict” and that they were “unhappy with the basic gyratory concept“.

Living Streets Edinburgh, a charity which exists to promote walking and better quality public spaces, have also raised concerns. Before the latest round of consultations got underway, they claimed the design did “not comply with Scottish Government or the Council’s own policies” and that there will “be a loss of important areas of public realm / cultural / green space“.

To promote these points, supporters of Living Streets Edinburgh have been contacting City of Edinburgh Councillors. Over a two week period, I received well over 150 e-mails. To put that in context, I normally receive new casework e-mails from one or two constituents per day.

Much of the public realm arguments focus on the threat to the space outside St Mary’s Catholic Cathedral, home of The Manuscript of Monte Cassino (an open palm, a section of limb and a human foot) which were created by Eduardo Paolozzi for that spot – apparently the centre of his universe. Indeed this space, has changed considerably as the design has evolved. The latest design places Eduardo Paolozzi’s works outside the Cathedral, but access problems remain:

"Shall we tell funeral directors to drop off coffin & come back in an hour?" One comment about lack of access to Cathedral at #PicardyPlace

Eduardo Paolozzi’s works outside the Cathedral.

A second public realm focus is the centre of the “roundabout”, and what quality of public realm space it can provide. Dr Peter Mathews, an academic and expert in urban policy and regeneration, described this space as “the finest urban design from the 1960s” and the centre’s of gyratory systems as being “deeply unpleasant places“. He concluded by saying: “The current proposals, if implemented, will just be an embarrassment for the city and demonstrate a lack of leadership and bravery on changing transport modes and tackling climate change”. Ouch!

Of course, one could argue that these critical voices only represent one side of the argument. The problem is that nobody is representing the opposite with anything like an equal amount of energy. I have not spoken to anyone who backs that gyratory concept who does not also have concerns about it. They recognise it’s a compromise.

So why compromise so much when Scotland’s Capital deserves better? That question takes us back to the £850m St James Quarter development and its corpulent car park. A ~£60m Growth Accelerator Model (GAM) funding agreement was brokered for the public works associated with the St James Quarter development between the developer  City of Edinburgh Council, the Scottish Government and the government’s Scottish Futures Trust (a shady organisation involved in the SNP’s version of PFI). Councillor Claire Miller described the Picardy Place road design written into the GAM deal as “disappointing” and claimed it “locks the city centre into very high volumes of private vehicle use”.

Papers presented to City of Edinburgh Council’s Transport and Environment Committee make clear that although the total value of the GAM contract is around £60m, £55m of that is from the Scottish Government, only £15m is allocated to Picardy Place. The paper does, however, also contain this threat: “Any fundamental review of the current design could put at risk these agreements, the delivery programme, and Scottish Government funding, with resulting further risk to the delivery of any revised layout and to the extension of the tram.“.

What is interesting about this threat is that I understand that no discussions had taken place with the SNP Government on the issue – it is simply speculation. As someone who is positive about Edinburgh, I like to think that the Scottish Government would be willing to put more money in the pot if a better design could be found. Indeed, it may well be that any such design would be cheaper!

Conclusion
At best, the current Picardy Place proposals are unpopular. At worst, they are unsafe and will be a backward step for Edinburgh. With the city centre review underway, the decision is being made at the wrong time and may actually undermine the review. Cutting across this is the GAM agreement. It hangs over the decision like a dark cloud.

My feeling is that we should do all we can to engage the GAM partners in a positive conversation about what’s possible. One that seeks to integrate Picardy Place and the St James Quarter into the wider discussion about ensuring Edinburgh remains one of Europe’s greatest capitals. The discussion needs to focus on more than the movement of cars and the width of footpaths. We need to think about place making, wellbeing and the economy. We need to think holistically about ensuring Edinburgh is a liveable city.

As far as I know, none of the political parties in Edinburgh have reached a position on the current Picardy Place proposals, but I think it is fair to say that the Greens oppose them just as much as the Tories support them. Within the Labour Group, I shall be arguing that the current proposals can’t be supported. That does not mean that my mind is closed, or that I won’t listen to the local community (and those representing them). It does, however, mean that I think Edinburgh deserves better.

4 thoughts on “The Picardy Place Predicament – Place, Movement or Both?”