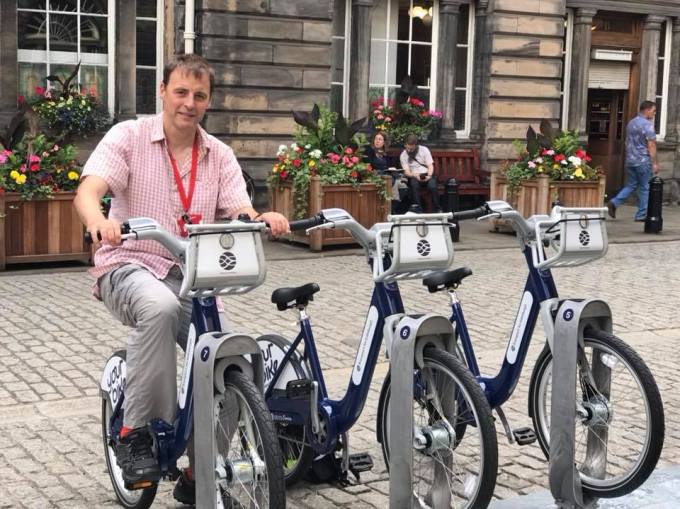 Me on one of the bikes prior to the launch.

Eddie Tait from the excellent Boardwalk Beach Club in Cramond has a bit of a point when he said he was “stunned” after being asked for £3,000 to host Edinburgh’s bike hire scheme outside his award winning diner (Report, 15/10/18).

I have only heard good things about the scheme. Yes, it was maybe a mistake to let a fast food company sponsor the bikes but apart from that I think most people see it as a wholly positive step. Indeed, it must be good as most of Edinburgh’s political parties appear keen to take credit for it from Labour’s Lesley Hinds.

However, the aim must be bigger than having a bike hire scheme for the sake of it, or to compare ourselves with other cities. We have to think about how the scheme can be used to do much more than get us from A to B.  I’d suggest four key aims should drive the future of the scheme.

Inclusion – We have to use the scheme to encourage people from deprived areas to live healthier and happier lives. Right now, not one single docking station is in a deprived area. Bizarrely, the station at the City Chambers is the one in the lowest area of deprivation.

The table shows the SIMD data for each station location – SIMD16 Decile 1 is the most deprived area (50% of Edinburgh is 7 or better), but no station location scores below 4. Government anti-poverty strategy tends to focus on Decile 1 and 2.

Economy –We must use the bikes to drive our economy by using them to get tourist out the city centre and to places like Colinton and Cramond.

Apart from Portobello, the stations are limited to central Edinburgh. Edinburgh University accommodation is well linked to the main campuses, but Napier & Heriot-Watt are not connected. Scottish Government Offices are also well served. Tourists don’t appear well served – even linking to Morningside, Haymarket & the Botantic Gardens would not have been (and still are not) a huge leap.

Active Transport – We must use the scheme to encourage people out of their cars. They should be a stepping stone to full bike ownership. In a city like Edinburgh, why can’t my son use his bus pass to hire the bike? Why are none of the stations west of Stockbridge or south of Edinburgh University?

That’s my strategy, but the question is what are Just Eat Cycles basing their plans on? I asked them, and they said “as we are in the early days of the scheme, we will be expanding where we can”.

I fear some joined up thinking is needed.

One thought on “Ediburgh’s Bike Hire Scheme – Is a bit of joined up thinking needed?”