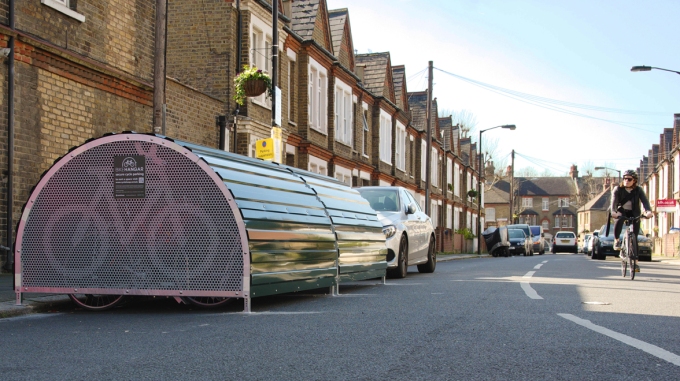 Below is a briefing from the Council on the introduction of secure cycle storage.

Introduction
1.1 The issue of residential bike parking is a particularly significant problem for Edinburgh, where here is a high proportion of tenemental properties which have limited space available for bike parking.

1.2 A scheme to provide secure cycle parking units to alleviate this issue has been introduced in the city.

1.3 This note provides the information requested by Committee on the details of the scheme, including finances.

Background
2.1 On 21 February 2012, the Transport, Infrastructure and Environment Committee approved a pilot project to trial the installation of covered, on-street, and secure cycle parking for use by residents. The trial scheme started in August 2014 on Lonsdale Terrace, Warrender Park Terrace, South Oxford Street and Douglas Crescent.

2.2 The trial aimed to alleviate the problem of cycle storage within tenements and to make cycling an easier option for leisure or the daily commute. The trial units have been fully utilised since installation and there are significant waiting lists at each site.

2.3 On the back of this success a report on the outcomes of the trial was considered by the Transport and Environment Committee on 1 November 2016 and approval was given to roll out the scheme.

2.4 On 4 October 2018 the Committee approved an increase to the previously approved roll out, along with recommended changes to the contract for installation, management and maintenance of the units.

Main Points
3.1 The contract for the roll-out of the secure cycle parking units has been awarded to Cyclehoop Ltd for a five year period (with the option of a further year’s extension). The value of the contract is £576,000.00.

The contract is for the supply and installation of 180 units within the first two years of the contract, with each unit capable of storing six bikes. They will also be responsible for the management and maintenance of the units for the period of the contract.

3.3 Users will pay a monthly charge of £5 to use this service, in addition to an initial deposit. From this, the supplier will set aside £1 per month for each filled space which, based on 80% occupancy of 180 units, would create an annual income of £10,368.00 for the Council. This income will be ring-fenced to assist with the cost of any major repairs not allowed for within the contract and/or potential future expansion of the scheme.

3.4 A desktop review and site visits has now been undertaken for all locations suggested by residents. The sites where it is proposed to proceed with installations have been identified and consultations have now concluded.

3.5 For each location, letters were sent to all businesses/residents likely to be impacted directly, up to a maximum distance of 50m, and to ward Councillors and the Community Council. All feedback received will be carefully considered and action will be taken where it is possible to mitigate any issues raised. If there is a significant level of opposition, a decision on the continued progression of a site will be made in consultation with the Convener and Vice Convener of Transport and Environment. Successful sites will then be progressed to installation or commencement of the Traffic Regulation Order (TRO) process, as appropriate.

3.6 Work has been underway to ensure co-ordination of this project with other parking changes including Controlled Parking Zone (CPZ) extensions and the ongoing review of on-street bin locations. Following this, it is proposed to advertise the TRO for around 60 streets in early January 2020, leaving around 17 locations to run concurrently with the CPZ extension phases 1 and 2 TRO in March 2020. This will avoid any duplication of TRO processes and minimise delays to all initiatives.