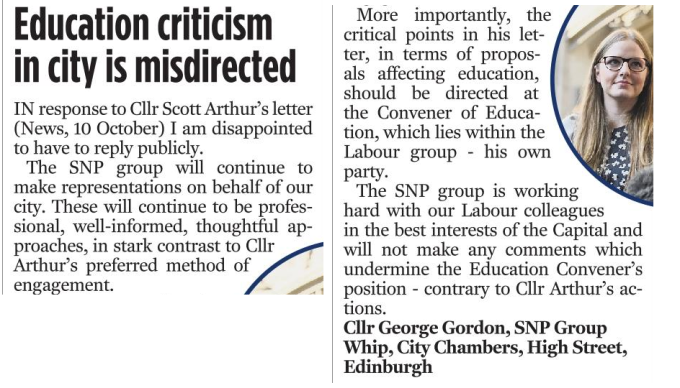 The comments made by SNP Councillor George Gordon  on education in the Evening News are outrageous (Letters, 12/10/18). Cuts to education funding in Scotland have led to a national decline in standards in absolute and relative terms. Indeed, the SNP Government response to news that Scotland was falling down international educational league tables has been to pull out of them!

The reasons for this decline should be easy for a man of George Gordon’s intellect to see. Cuts implemented by his party have seen 4,000 teaching jobs lost. These cuts, a 24% real terms pay cut since 2008, and the bungled introduction of the Curriculum for Excellence in Scottish schools has led to unacceptable stress levels in the body of teachers that remain.

It’s no wonder that the EIS is balloting on strike action.

On top of all this, Edinburgh now faces a further £106m of cuts and reports suggest education is in the sights of the SNP led administration. Indeed, SNP Council Leader Adam McVey tweeted yesterday  that Nicola Sturgeon was focusing on “partnership between national & local government”. For the SNP, this is a partnership where council budgets are slashed and those that oppose cuts to education are attacked in the Evening News by nationalist Councillors.

Councillor George Gordon could have stood in solidarity with teachers in his ward. He could have asked Adam McVey, the SNP Finance Convenor or the SNP Education Spokesperson to publicly oppose cuts to Edinburgh’s budget because of the impact they would have on a whole generation of Edinburgh school children. He chose loyalty to his party, not our city.

Instead, he chose to wage a personal attack on me for opposing these cuts. Worse than that, he also tried to blame the cuts on Edinburgh’s Education Convenor simply because he’s a Labour councillor. It would be the easiest thing in the world for Councillor Ian Perry to walk away from the education brief and hand it to the SNP, but he knows he’s the last line of defence against the cuts Edinburgh faces.

One thought on “Message to Cllr George Gordon: I won’t stop standing up for education.”