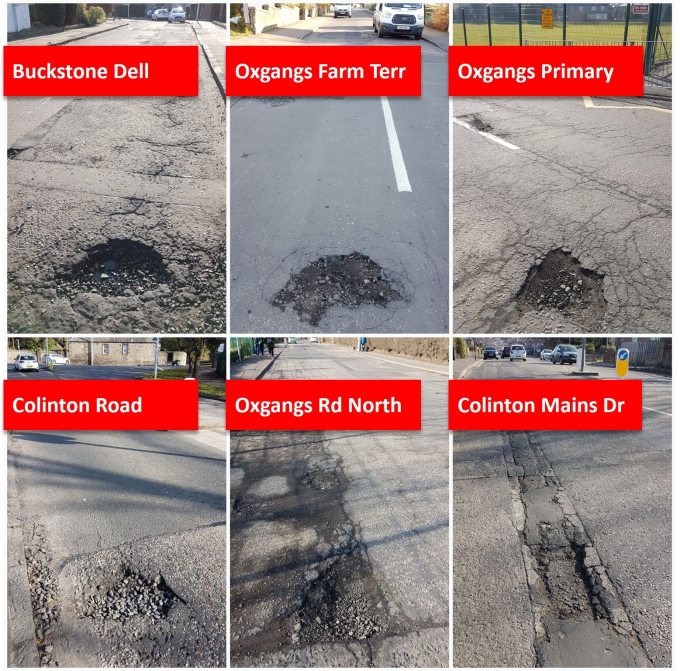 Having read Brian Monteith’s latest opinion article on potholes I have to say it feels like I’ve found a sole-mate. The snow covered streets provided me with a brief respite, but the state of the roads in my Ward is utterly depressing. Indeed, some appear to have grown under the blanket of snow to such an extent that fitting a manhole cover to them may be easier than patching them.

It is important to remember, however, that the problem goes far beyond our roads. This week I received a letter from Cameron, a partially sighted pupil at Braidburn School who uses a wheelchair. He asked me to “please fix the pavement” adjacent to a pedestrian crossing he uses as there is a risk he could fall out of his chair.

Of course, there is nothing special about Cameron’s experience, you don’t have to be in a wheelchair or be partially sighted to have a problem with our pavements. Indeed, when I went along to have a look at the section of footpath Cameron reported I wasn’t surprised to see the source of the problem was a substandard reinstatement undertaken after a utility repair.

All too often utility repairs are not undertaken properly and eventually cause us problems. That’s why the Council must keep on top of utility companies to ensure repairs are done to the right standard.

This is where Brian Monteith and I part company. He thinks I’m “utterly wrong” to say that a significant factor contributing to the problem is cuts imposed by the SNP Government.  Whereas I agree with Audit Scotland when they reported that road maintenance and inspection funding is around 14% lower than the minimum acceptable. Indeed, I think most people in Edinburgh will agree that potholes have multiplied over the past 10 years irrespective of which Political Party has been running our Capital.

The problem we face is that  cuts to Edinburgh’s budget over the past 10 years mean that protecting services such as education and social care leads to the road maintenance budget being cut disproportionately.

Yes, Edinburgh must spend its transport funding as efficiently as possible by adopting new methods, materials and technologies. However, let’s not pretend Edinburgh can keep on doing more with less.

3 thoughts on “Potholes – Let’s not pretend Edinburgh can keep on doing more with less.”