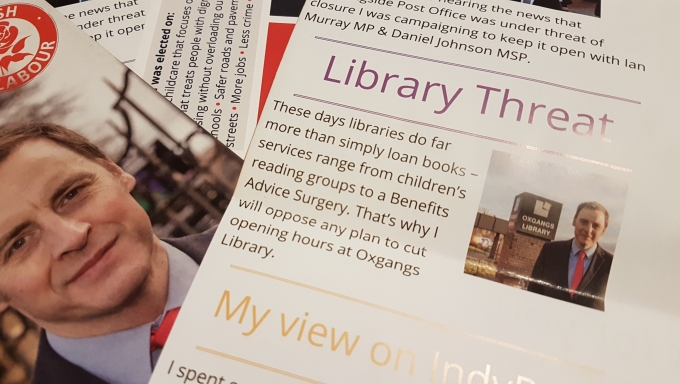 From my January 2017 Election Leaflet (I said the same about Colinton Library in a separate leaflet).

On the 22nd of February, the City of Edinburgh Council will set its budget. Local Government budgets have always been an example of the “economic problem” – meeting infinite demand with limited resources. The problem we face now in Edinburgh is that demand is increasing due to an aging population and increasing poverty, but resources are falling due to the combined efforts of the UK and Scottish Governments.  These are brutal times.

When I was first elected I told a room full of people in the City Chambers that I would not support any cuts to the education budget. In response, a Council Officer laughed at my naivety. I now get the joke – the cuts we face are so significant that no  Council service is spared.

Amidst the discussions about what to cut, most Councillors like me have to think about what their priorities are. This is a game of poker between the parties – cards are not shown, but emotions can often betray what’s planned.

Right from the start, I have been clear about what my priorities are. In what cynics might describe as a break from tradition, I have based my 4 key priorities on my election pledges, the needs of our Capital and feedback from my constituents.

A key priority for me is tackling homelessness, but this has to be done sustainably. We need to get hundreds of people out of hostels and temporary accommodation, and in to good quality social housing. If that means buying back good quality former council housing, so be it.

Secondly, we need to tackle the crisis we are facing in social care.  We currently have 2,000 people waiting on a care package assessment, and 45 people are added to that queue every week. We need to clear that backlog.

Thirdly, if we are serious about fighting inequality and reversing the national decline in education, we must kick out the plan to cut library opening hours across the city.  Cutting libraries during tough times is like cutting hospitals during a plague.

Lastly, it has been widely reported that the support available to families with children with  complex additional support needs has been reduced. If Edinburgh is serious about everyone reaching their full potential, we must find extra funding to better support this service.

These are my priorities.  The amazing thing is that they are not radical ideas, they are simply about maintaining these services at the minimum level we should really be able to take for granted. That should shame us all.